You may listen to the podcast version of this article here.

While I was in Cradle Roll Sabbath School,  before I could even read there was a picture in my Bible of Jesus dying on the cross. I was mesmerized by this picture and would study it in church as the preacher preached. As I took in the entire scene one thought kept reverberating in my heart, Jesus died for me.  One night when I was seven I put my Bible away to fall asleep. As I laid there contemplating that picture the Holy Spirit was painting that very scene on my heart. That night I decided to give my heart to Jesus and be baptized  because Jesus died for me. 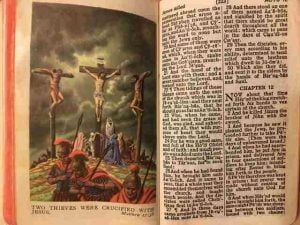 This is the Bible and picture I would always love to look at as a child.

Over time the world and even people in the church have pressured and even threatened me to compromise my faith and convictions. When they demand my loyalty to them I remember that night when I gave my heart to Jesus. I remember the people pressuring me to compromise did not die for me. Jesus died for me. I must be loyal to Him. I gave my heart to Jesus. I did not give it to people in the world or in the church.

Way too many times over the years I have compromised my faith without any pressure from anyone else at all. Again my mind goes back to the picture of the cross that the Holy Spirit painted on my heart on that night so long ago. I don’t give up. Jesus died for me. I ask His forgiveness which He so freely offers me. I know I am forgiven because Jesus died for me.

I have completed many more trips around the sun since my cradle roll days and baptism when I was seven. Still one theme still grips my heart and mesmerizes my soul. Jesus died for me. As time passes the Holy Spirit continues painting even more details into that picture of the cross. As I continue studying Scripture and not just a picture the details become increasingly more vivid on my heart making the scene more real, more wonderful and more awe-ful. While many want to give specific theological labels to the cross I find the picture of the cross the Holy Spirit is painting on my heart is much to grand and vivid to fall under any one label.  As I have written before, many camps of thought are not so much wrong in what they teach as much as in what they fail to teach. One camp of thought does not necessarily have to replace the other. I believe we get the big picture of the cross when we put all the camps of thought together, and just throw away the labels. After all I did not fall in love with a theological label. I fell in love with Jesus because Jesus died for me.

The first time I heard the Gospel presentation I was taught that when I chose to knowingly break God’s law that was counted as sin according to 1 John 3:4. Sin is punishable by death according to Romans 6:23. John 3:16 tells me God gave His Son to die the death I deserve so I can have eternal life. As I continue studying I find another definition for sin besides 1 John 3:4. In John 16:9 Jesus also defines unbelief as sin. I have studied that Jesus died not so much because humankind took a piece of fruit they were told not to, but because in taking that fruit they showed they did not trust God or really believe in His love. Therefore God became a man and went to the cross to die and prove that He loves us so we can believe in His love. Therefore Jesus heals us from the sin of unbelief. The atonement appeases an angry race instead of an angry God. So which is it? Did Jesus die because humankind sinned by breaking the law which is punishable by death, or did Jesus die because humankind stopped believing in God’s love and by dying on the cross Jesus reconciled us by convincing us He loves us? Both! Interestingly John records both definitions of sin-in 1 John 3:4 the sin of breaking the law, and in John 16:9 the sin of unbelief. John understood Jesus died for every definition of sin.

The law of Moses was unable to save us because of the weakness of our sinful nature. So God did what the law could not do. He sent his own Son in a body like the bodies we sinners have. And in that body God declared an end to sin’s control over us by giving his Son as a sacrifice for our sins.  He did this so that the just requirement of the law would be fully satisfied for us, who no longer follow our sinful nature but instead follow the Spirit. Romans 8:3-4 NLT

There is not a law in this universe that will allow someone to die for someone else. I can’t go to a murder trial and offer to die for the defendant so that he can go free. They won’t allow that. God can’t allow it either. So what was God’s solution? Jesus took my human body to the cross and died not just for me but as me. Not only is my sanctification dependent on the humanity of Jesus, my justification is dependent on it as well.

Because God’s children are human beings—made of flesh and blood—the Son also became flesh and blood. For only as a human being could he die, and only by dying could he break the power of the devil, who had the power of death.  Only in this way could he set free all who have lived their lives as slaves to the fear of dying. We also know that the Son did not come to help angels; he came to help the descendants of Abraham. Therefore, it was necessary for him to be made in every respect like us, his brothers and sisters, so that he could be our merciful and faithful High Priest before God. Then he could offer a sacrifice that would take away the sins of the people. Hebrews 2:14-17 NLT

Jesus had to become us and die as us. This is why Paul never actually refers to Jesus dying for us as much as he writes about Jesus dying as us. Where we all sinned when we were in Adam we have now all lived a righteous life in Christ.

Yes, Adam’s one sin brings condemnation for everyone, but Christ’s one act of righteousness brings a right relationship with God and new life for everyone. Romans 5:18 NLT

Also as I sinned in Adam I have now been crucified with Christ. Take a look at how these verses describe us dying with Jesus and not just Jesus dying for me.

My old self has been crucified with Christ. It is no longer I who live, but Christ lives in me. So I live in this earthly body by trusting in the Son of God, who loved me and gave himself for me. Galatians 2:20 NLT

Or have you forgotten that when we were joined with Christ Jesus in baptism, we joined him in his death?  For we died and were buried with Christ by baptism. And just as Christ was raised from the dead by the glorious power of the Father, now we also may live new lives. Since we have been united with him in his death, we will also be raised to life as he was.We know that our old sinful selves were crucified with Christ so that sin might lose its power in our lives. We are no longer slaves to sin. For when we died with Christ we were set free from the power of sin. Romans 6:3-7 NLT

Either way, Christ’s love controls us. Since we believe that Christ died for all, we also believe that we have all died to our old life.2 Corinthians 5:14 NLT

Where I sinned in Adam I have now been crucified with Christ. He took my flesh to the cross and crucified it. That is my justification. The good news is it does not stop there. Jesus also took on humanity and died so we can be sanctified and have victorious lives. Consider how these passages describe the victory Christ gives us by taking on humanity. Lets go back to where we began at Hebrews 2.

Since he himself has gone through suffering and testing, he is able to help us when we are being tested. Hebrews 2:18 NLT

He personally carried our sins in his body on the cross so that we can be dead to sin and live for what is right. By his wounds you are healed. 1 Peter 2:24

For God made Christ, who never sinned, to be the offering for our sin,so that we could be made right with God through Christ. 2 Corinthians 5:21 NLT

The atonement was not only possible because of Jesus’ complete humanity but also because of his complete divinity.

The broken law of God demanded the life of the sinner. In all the universe there was but one who could, in behalf of man, satisfy its claims. Since the divine law is as sacred as God Himself, only one equal with God could make atonement for its transgression. None but Christ could redeem fallen man from the curse of the law and bring him again into harmony with Heaven. Christ would take upon Himself the guilt and shame of sin—sin so offensive to a holy God that it must separate the Father and His Son. Christ would reach to the depths of misery to rescue the ruined race. –Ellen White, Patriarchs and Prophets, Page 63.

Did Jesus make an atonement as fully man or fully God? Both. Did Jesus die to free us from the power of sin or the penalty of sin? Both. Did Jesus die because of the sin of breaking God’s law or the sin of unbelief? Both. I have learned so much more about the cross since my early childhood days. But I am still not in any one theological camp or label. When I am tempted I look at the picture of the cross the Holy Spirit has painted on my heart. His love empowers me to overcome as I remember Jesus died for me. When I make stupid decisions and fall into sin I look to the cross and know I can find forgiveness because Jesus died for me. I am reconciled to God and can believe in His love because Jesus died for me. God made an atonement for my sin and transgression of the law when Jesus died for me.

Many years later I have experienced hundreds of victories since my Cradle Roll days. Victories I never imagined possible. But before you pat me on the back I have also suffered a multitude of defeats that I never would have imagined possible, when I first gave my heart to Jesus at the tender age of seven. Sin has brought me lower than I ever comprehended possible and Jesus has raised me higher than I ever comprehended possible. I have found theological theories and labels get me nowhere. When I need forgiveness or power to overcome I do what I have been doing since Cradle Roll. I look at the cross and remember, Jesus died for me.